Paid Ad Extender is a plugin that will allow your users to purchase ads with longer duration (later expiry date).

This plugin requires Classipress theme to be installed.

Why should I use this plugin?

Well, if you think featured ad that comes with Classipress is not enough and you want to make some extra money with your site, then this is the right plugin for you.

How to use this plugin

After installing the plugin you should go to plugin’s settings and there you will click on a Plus button that will add your first feature. 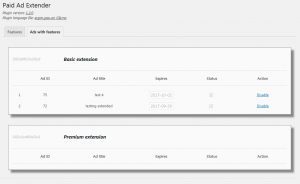 On the left you have “Enable” checkbox that will enable the feature. Not enabled features are not shown to users.
Next is “Feature name” and “Description” that are shown after Featured ad selection when posting an ad.
In the “Price” field you specify the price a user has to pay to get this feature.
“Duration” is time in days after how many days the ad will expire.

As you have probably noticed there is a number shown on the left of the feature that represents the number of ads using that feature.
If you decide to delete some feature, you won’t be able to do that until that number reaches zero. So if you would like to take away a feature, first disable it. Ads using this feature will still be shown with that feature until that feature expires. After that you will be able to delete it.

You can change feature settings even if there are ads using it, but changes will not be reflected to current ads using these features.

No compatibility issues so far.
This plugin also works with child themes.
This plugin has been tested on Classipress 3.6.x and 4.0.x

No time limit on your purchased license.

No limitation on number of installations you can use plugins on.

All plugins have language files included, so you can translate them to your language.

Remind me of new plugins